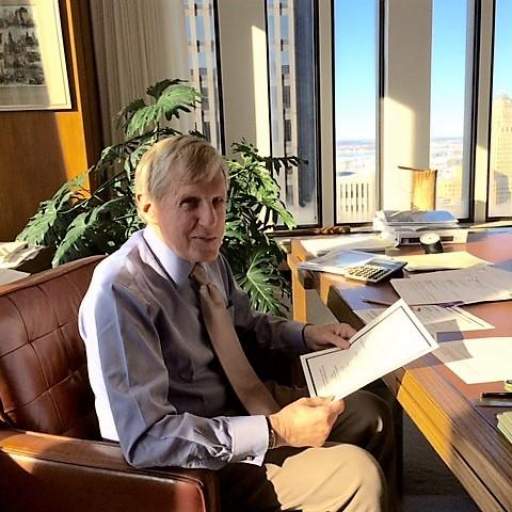 Mr. Wilmers in his downtown office

"One way or another I've been involved with the Buffalo Public School system for many years. First we got involved with School 68, which is now Westminster Charter School," recalled Wilmers.

In January of 2015 we met with Wilmers in his M&T Bank office building downtown. He was preparing for a speech, "The State of Public Education in Buffalo".  It was a time where many city schools were failing due to poor academic performance by students.

"There has been an air of optimism in the city of Buffalo due to the sight of construction cranes dotting the skyline. However, the health of our city’s public education system is in grave condition despite recent efforts to establish new and experienced leadership within the district," stated Wilmers.

As a major community stakeholder, Wilmers was determined to use his speech to push for wholesale changes to fight for improvement in the city school district.

"We can't have a week educational system in the core center of our population and not have a vibrant region," Wilmers said in the 2015 interview.

"Bob and his thoughts about education, how important it was being the keys to success for people to have that education for people to kind of reach their dreams and aspirations," said Glenn Jackson, chief operating officer of Buffalo Promise Neighborhood.

Jackson said for the better part of 30 years, Wilmers was a major advocate for city schools.

"Now we've got Buffalo Promise Neighborhood with over 1,100 kids in our sort of area where we are impacted K-8, but also early education where we built a school a few years ago and we're essential going to build another early education learning center as well for next year. So, it's really grown. It really speaks to Bob's attention to education being that key facilitator of again reaching the dreams and aspirations of our students, our kids and our community members," Jackson remarked.

If you need you proof to see that Wilmers vision to improve an impoverished area in the Buffalo Promise Neighborhood is working just you can ask one of its residents.

"Buffalo Promise Neighborhood has so many programs for this district, from 'Spruce Up' to the planting of flowers to the making of different little gardens for the children. The children participate in gardening at the school, so it's a wonderful thing," said Bernice Prince.

Prince is an active member with community council in the University district.

"We're learning to recognize when things need to be picked up and lifted up and there are so many avenues and so many people that we can reach. We all have the same common goal: to make things better in the community," Prince declared.

"He was one of the finest gentlemen that I ever met that was committed to public education and to the city, the community he lived," commented Dr. James Williams, former Buffalo Schools Superintendent.

Williams, who arrived in Buffalo in 2005,  reflected on Wilmers' devotion to education. It was Wilmers who provided $100,000 to the district to conduct a superintendent  search for a new leader. Williams was the person selected.

"He was very helpful to my administration in many ways and he wasn't public about things he did," recalled Williams.

Wilmers' imprint on the city school district will be carried out by the commitment of M&T Bank and Buffalo Promise, supporting students in years to come as the district, under the leadership of Superintendent Kriner Cash, rebuilds with goals of improving academics and graduation rates.

WBFO asked Jackson what will change without Wilmers' presence.

"He will be missed and there's no replacing a Bob Wilmers. But I will say this: when people talk about the culture at the bank and sort of the DNA, essentially it is one in the same, the DNA and the fingerprints. And Bob's fingerprints are all over it. So when you talk about going forward, day to day, we are going to continue to work because that's what he would have wanted us to do, to continue to try have an impact, continue to have an impact on the minds of children, their parents and the community," responded Jackson.

"My hope is to that we can come together to establish a bold and innovated  approach to reforming education in the Buffalo Public Schools. The future of our children and the City of Buffalo itself is in our hands," Wilmers stated in his 2015 community speech.

A community memorial is being planned to honor Wilmers in Buffalo for some time in January.

Link to article and listen to interview here.

Buffalo Promise Neighborhood is a long-term collaboration between M&T Bank and its community to empower schools, students, and families. We understand that learning and opportunity are intrinsically connected, and that success is most meaningful when its shared by everyone.